There she was, in a box. I was flabbergasted.
We knew her, alright, her family at least. Even though you rarely saw her, you knew she was out there, somewhere. So, her existence couldn’t come as a surprise. But what was she doing in that box, inside our shed?
What she was doing? Simple: she was relaxing. More relaxed she couldn’t be. Although she moved, very slightly, when our eyes met.
I had nearly missed her altogether. I had walked into the shed to get something and it was when I was almost outside again, that…
That what? Was it that I felt that in the shed another heart was beating? Was it that magic that made my head turn round? Or had I unconsciously registered, in the corner of my eye, that something had been added to the familiar contour of that box? Two small triangles, setting off against the light.
Those two little ‘pyramids’ proved to be attached to something. They were the extremities of la volpe. In the box lay a fox. 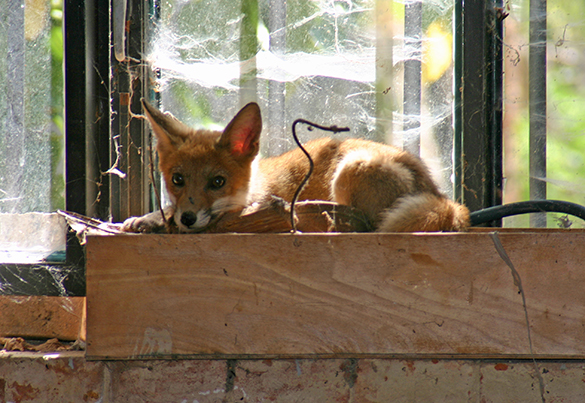 ‘What are you doing here?’, I heard myself say. In Italian, as if I expected a reply in the local language.
But the fox didn’t say anything. She didn’t squeak, she didn’t bark, she didn’t move. She just looked at me. Alert, but serene.
La volpe, in Italian ‘fox’ is feminine. That now seemed quite natural to me. Although in the folk lore of many cultures foxes are anything but cute, this one seemed loveliness itself. Anything softer was unlikely to exist. Pure innocence in a box.
Standing agape, I realized what is more than being perplexed: being perplexed in two. I went for my wife. And my camera. Would those ears sneak out in the meantime? No.
She was still there, but briefly. Then she got up, stretched out, like a cat, and demonstrated how she had made it to her relax box. She wriggled herself through the window. A miracle. So tight was the opening, that you would swear that even half a fox couldn’t get through.
Once outside myself, I carefully peeped around the corner where I could expect her. She, in turn, was doing the same. A small, investigating head appeared, at exactly the same moment as mine. But hers retreated at once. Having found me outside, she went back in.
There she sat, again. In that box. But this time, as I watched her from the other side, she suddenly looked different. More Reynard-like. Much more so. With a glance that makes chickens get goose bumps. 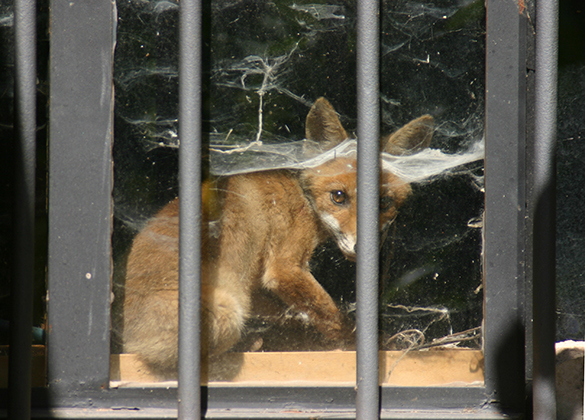