A Personal Tour of the Rijksmuseum, Amsterdam

A rather strange element, this pavilion, as it hasn’t anything to do with The Netherlands. Therefore, it is fitting that the Asian collection is housed in an especially built, distinct pavilion. (Not that the Rijks doesn’t boast other foreign stuff, also because of our colonial past, but still).
In any case, it is a stranger one wouldn’t want to miss, as this part of the museum may be relatively small, it is exquisite. The word that comes to the fore is Presence, with a capital P. Much of what is on show here is remarkably Present. But not showily so, which makes it even more impressive.
Size, in that respect, doesn’t matter. It goes for the Guanyin, measuring more than one by one meter, just as for the Budai, hardly six centimeters high. Even things such as a bell express an unusually high P-factor, and even a cup or a vase.

At the entrance of the pavilion Shiva, though, expressly demands attention, not least because of where they have placed her. As Creator-And-Destroyer-In-One she tramples on something you would certainly want destroyed one day, preferably straight away. That is ignorance, convincingly shaped as a trivial little creature. 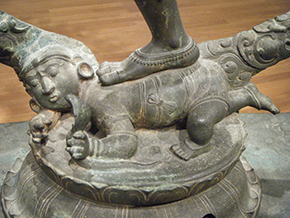 Much smaller still, but not trivial, is Ganesha’s little rat. Probably because Ganesha is such a familiar sight, you tend to be more startled seeing that rat than by the human figure with the head of an elephant. Because the tiny rat is more than that. It is Ganesha’s means of transport. He rides on it…
(Vaguely recalling the tenor Luciano Pavarotti, who fancied horse riding. Poor things).

Can a Hindu goddess strike a pose more comely?

I’ve always thought the piggy bank was something typically western. Well, no.

An important detail of samurai swordsmanship comes only after the deed is done: replacing the blade into the sheath, without harming yourself. And in case it goes wrong, then it applies:

The hand guard will always linger
Longer than your finger.

The netsuke collection could do with some reinforcements. Or is there more than is displayed?

Yes, it’s true. We know a lot, but this we don’t. Good, though, that some mysteries remain mysterious. So, what was the purpose of a cong? Some five thousand years old. Normally put into graves. Made of jade = harder than hard = terribly difficult to cut = something very important. But what is it? There is a theory that the quadrangular aspect of it represented the earth and the circular form the sky. That’s about it.

Oh, what a lovely horse is this! And the good news: to be beautiful doesn’t require your head to be regular.

Amsterdam means ‘Dam in the river Amstel’. It once used to be known as Amstelredam. But what would be more logical than this?

Maybe the explanatory text next to this table screen is a touch overly positive, pointing towards the ‘amused interest’ of the Chinese towards the Europeans. Possibly ‘contemptuously amused’ would be more accurate, as they obeserve: ‘They dress in grass, eat from trees and despise their monarch‘.

A lohan can see everything. But are the eyes in this sculpture original?

Yes, Longmen. Once upon a time I was there myself, where everything was put into perspective. 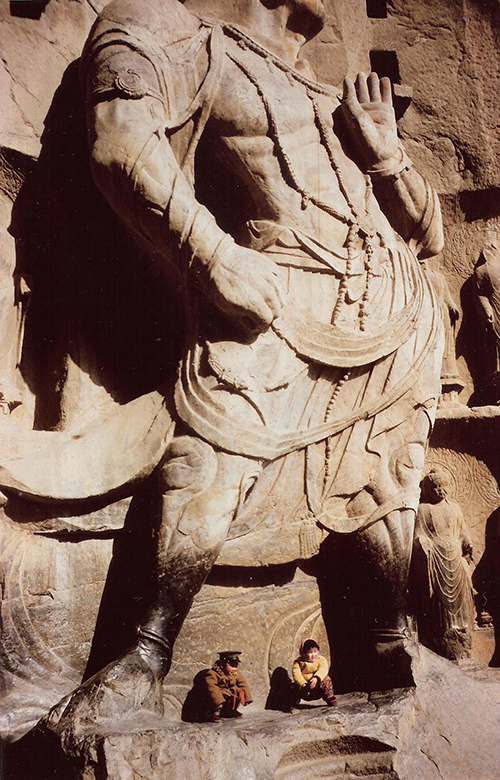 How sad it is that some people think that by killing one can gain entrance to paradise. While according to others it can be done in a much simpler way: just by believing and sincerely invoking a name.

Ever heard a room screen say ‘Sssh’, softly? On the left side of the screen, snow slides, masterly, off a pine tree. The master: Mochizuki Gyokusen. 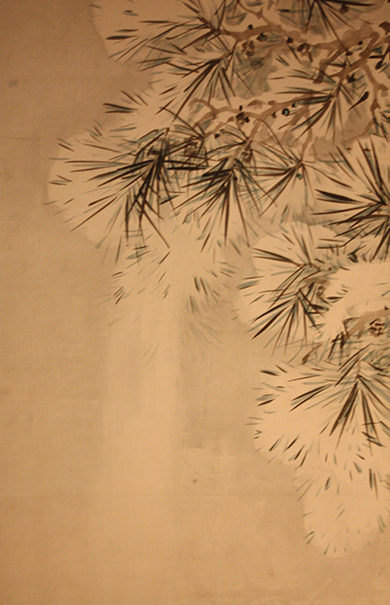 The Japanese lacquer writing boxes! Like the one with the praying mantis and the eggplant. And the one of the poet ‘who stopped playing the lute to listen to the rustling of the wind’. How superior can one get it? Well, like that. What a contrast with the non-stop smartphoning, ear-plugging human beings of today.
What more could one want than this absolute perfection? Nothing. Although… is it heart-warming? No.

And, yes, there they are, last but not least: the temple guards Ungyo & Agyo.
But what a shame! Present they are without a doubt, but saddening too, as they appear lost in a corner, next to an emergency exit. 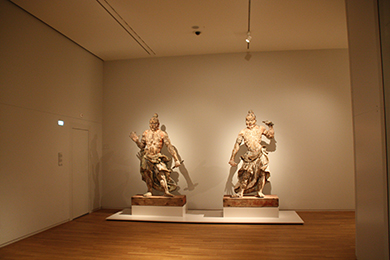 While they belong at a gate – an entrance – in Japan! It’s strange, there is much in this museum that belongs elsewhere, originally. But only confronted with this pair it is hurting. As they are standing here, so far from their habitat. Playing ‘daunting’. In that corner. 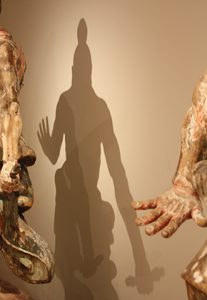 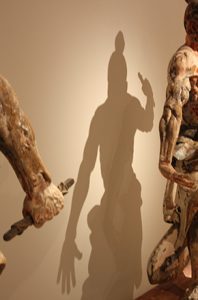 No, this location is unworthy of them. Where they are now, they can’t stay. What to do? Put them at the entrance of the pavilion, at least!

With a sigh I conclude my tour of the museum. But the sadness of The End rapidly dissolves in the triumph of It All. The conclusion is, and remains: the new RIJKS is splendid!

To all who made it possible, with gnashing, sweat and tears, I bow and say: ‘Thank you!’

The Museum Shop has quite a lot to offer, not least in the books section.

Not to be forgotten: the Rijks Print(s) Room. In the future also accessible online.

Fine weather? The garden offers a number of comfort chairs.

Not that it matters much, but what is in fact the front of the museum?

Anyway, the garden on the quay side (still?) sports a sculpture by Alexander Calder. Completely out of context here, but maybe as a fitting answer to the pair of scandalously out of context buildings on the other side of the canal. Better known as ‘The Salt and Pepper Set’.

Detached from the museum stands the Teekenschool, the Drawing School, 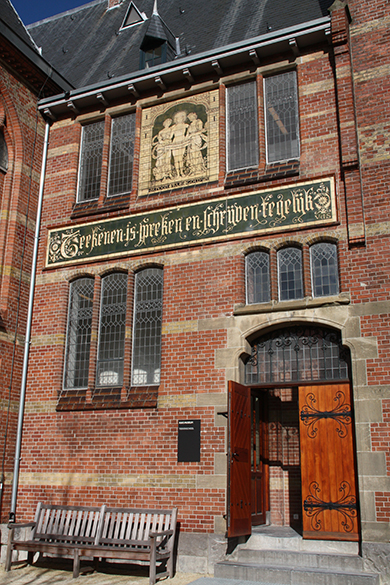 where all kinds of artistic education are on offer. 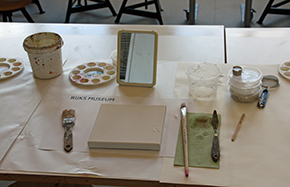 Accessible also only from the outside is the Michelin starred restaurant RIJKS. 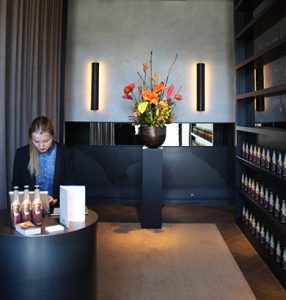 Tasteful and ‘chauvinistic’. Even all wines on offer are Dutch-made, even if most of those Dutch(wo)men make them abroad.

And then, finally, the probably most hotly debated argument among Amsterdammers during the reconstruction: should cyclists be allowed once again to pass under the museum after the reopening?
‘Of course not!’, said the architects.
‘Ýes, of course!’, shouted two-wheeled activists.
The cyclists won. 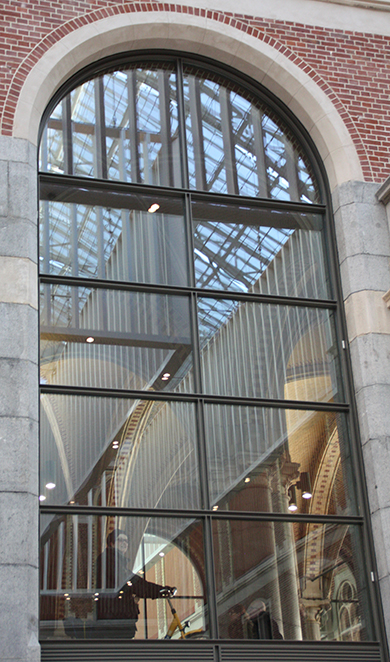 To be honest, I had sympathy for both sides.
As a cyclist myself, I didn’t fancy a detour, but I could have accepted it as a small sacrifice to honour our national treasure. On the other hand it is quite charming that in our country ’the small man’ (on his bike) can overcome big interests.
In any case, the fear that many museum goers wouldn’t make it to the RIJKS entrance, just like new born turtles don’t make it to the sea, didn’t materialize.
Note: cyclists in Amsterdam come in two sub species.
1) Deeply despised tourists, who nearly fall off their rental bikes through lack of speed
and
2) Local ‘bullets’ that whizz past your toes, if you’re lucky.
But so far, so good.