A Personal Tour of the Rijksmuseum, Amsterdam

A Dutchman, I once found myself in a tour bus filled with Chinese tourists, right in the heart of Amsterdam. The Chinese tour guide translated what a Dutch guide was saying, who proudly announced: ‘Here you see the Rijksmuseum, the most important museum in The Netherlands’.
At that time my knowledge of Chinese was still good enough to understand what the translator made of this:

‘This is some kind of museum, but we’re already going to a museum tomorrow, in Paris’.

Most tourists who visit Amsterdam will not leave without having seen the Van Gogh Museum. Rightly so, Van Gogh is stunning. But to skip the Rijksmuseum is not right, definitely not.
‘Rijksmuseum’ can be translated as ‘Museum of the Realm’, from an age when The Netherlands could still be described with such a grandiose term. The now tiny country on the North Sea was huge, back then.
While studying Chinese I had an old Indonesian as a fellow student who told me that, as a young boy, he was taught in the jungle of Java: ‘The Rhine enters our country at Lobith’. Lobith being at the border between The Netherlands and Germany.
Besides, The Netherlands had colonies in South-America and The Antilles, for a time had a strong presence in South-Africa and Sri Lanka, and for more than two centuries was the only western trading partner of Japan. Among other things.
Trade was our trade and we were good at it, be it pepper, slaves, anything. Result: we grew immensely rich and acquired, in all kinds of ways, more than enough treasures to fill an XXL-museum. Which we did.
The Rijksmuseum was founded in 1800. It opened at the present location in 1885 and reopened in 2013 after nearly ten years of heated quarrels and a restoration that proved, in the end, to be a spectacular success. (See below).
Although there are several Rijksmuseums in The Netherlands, the one in Amsterdam is considered to be The Rijksmuseum, colloquially shortened as ‘Rijks’. It is one of those Dutch words in which the letters i and j are combined and handwritten as one. The pronunciation of the ij-sound resembles somewhat the i in ‘like’.
As a student I visited the Rijks several times and always vowed to once see everything it contained, something like stating that one day you’ll lose weight. Not impossible, but improbable.
After the reopening, though, disaster came to the rescue. As a consequence, I regularly had to see a physiotherapist at two minutes walk from the museum entrance. So, I made it a routine to explore the Rijks afterwards. Hence,

The museum is divided in different sections, relating to certain periods or special subjects.
The order of these (mainly brief) notes, however, follows more or less the structure of the building, starting at the ground floor.
As the Rijks has an impressive online data bank of images, links are provided at most objects that are commented on in these notes. In this way, people who are somehow unable to visit the museum in person, are able to see those objects anyway, be it from a sickbed around the corner or from an armchair in New Zealand.
That is the main motive to publish these notes on this site: although ‘My Notes’ suffer, of course, from being mine and not yours, they may be welcome when yours are out of reach.

Some background information is added here and there, if considered to be useful for non-Dutch readers. 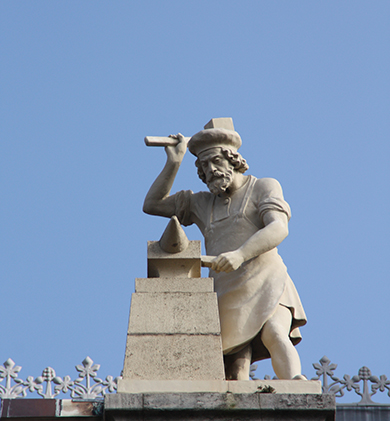 Today, the Middle Ages may be seen as ‘primitive’, but looking closely that view is questionable. Just watch the carving!

Repenting Peter appears somewhat distorted and ill at ease. No wonder, having just betrayed a VIP.
Interesting detail: background information lets us know “deprived of polychrome”. Probably just as well. One fears that quite a lot of ancient art that looks splendid right now, may have been much less splendid when it was new, freshly painted (= the way it was intended).

N.B.
This work was crafted by the so-called ‘Master of Hakendover’. Much art from the Middle Ages was anonymous, so this is just a way around it to give him/her a name. But, then, having been that masterly and what has Wikipedia on offer?
“Hakendover is mainly known because of the yearly procession of horses on Easter Monday”.

Some traces of polychrome can still be noticed on the Holy Barbara. She wears a necklace with a unicorn. Ah, ‘unicornology’, a subject in itself. At choice, that wondrous animal was seen either as a symbol of chastity or as phallic.

Surprise: hidden around a corner there are several unicorn horns on display. (Although the original purveyor could have noticed that narwhals are not that horse-like).

Mary with Jezus and four holy virgins is presented as being an ‘Ode to chastity’. With no less than five virgins on display (out of 11.001) that seems plausible, but what about Ursula’s necklace? On it, dangles a symbol that has gone through a curious transition: a heart pierced by an arrow. Possibly as a sign that she died a virgin in a volley of arrows.
Interesting theory: the 11.000 virgins that accompanied her may have been the result of a wrong interpretation of the text ‘XI M’, taken to mean XI(11) x M (1000) = 11.000. Instead of XI (11) M (Martyrs).

By the way, also on this painting Baby Jesus doesn’t show well. In that respect the Islamic ban on portraying their Holy Prophet is understandable.
Why on earth does the Infant Jesus nearly always looks droll at best, but mostly ridiculous or hideous? Even at the hand of artists that could do better, judging by their other work. On purpose on the sly? No, that can’t be, can it?

Ahum, did I miss something in the Bible? Christ descending into limbo? (A chance Adam grabs with both hands).

The Resurrection and the Three Maries at the Tomb.
And the Roman soldier in his medieval armor just sleeps on…

Also medically not without importance, one would think: the ‘pax‘. Ideal for spreading diseases, as the congregation was supposed to kiss it and then pass it on… Or, you could say, ideal to build-up the immune system.

Fine hunting horn. Fine too, but how can this be a shield?

First class close-up: The Lamentation of Christ, by the Flemish painter Colijn de Coter. Ever heard of him? Not me.

Always wondered how Saint Francis got his stigmata. Laser!

This is Saint Augustine, supposedly holding his city of birth in his hand. Quite a feat in itself. But his most important work is De Civitate Dei, The City of God. Isn’t that the ‘city’ the sculptor intends? If one is sculpting anyway… 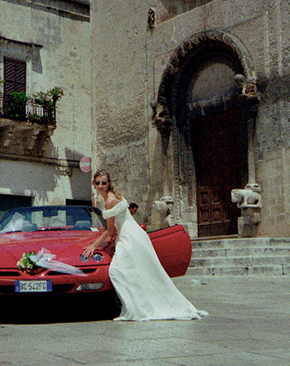 Concerning Christ’s crown of thorns, artists seem to have been rather uniform through the ages. Something like this. But some beg to differ.

No, look, there! A Pietà without Maria. Instead, no one less than God himself. So, that we can finally know what he looks like. Although it seems the artist didn’t know that firsthand. Cribbed, somewhat, from Dürer.

Never known that Alkmaar, a city in North-Holland renowned for cheese, once had a Master. Now I do, seven times over.

By the way, at this point some foreign readers may not mind to be enlightened concerning the name ‘Holland’. Often, it is used as synonymous with The Netherlands. Probably you do it too. Don’t worry, many Dutch people do it themselves. But officially it’s not correct. Holland used to be just one, albeit the most powerful, of the provinces that united against the dominion of the Spanish, resulting in The Netherlands. Today, the original ‘Holland’, on the west coast of The Netherlands, is divided into two provinces: North- and South-Holland.
(By the way Part Two: I just made a discovery for myself: I always thought that Holland means Hollow Land, being concave (and low). But apparently it comes from Holtland, wood land. Really?!).

Panels from the organ case of the Saint Vitus church in Naarden. Besides, a bit of body hair, so be it, but this?

These panels highlight an interesting phenomenon. What about local treasures that end up in national museums? To what extent can that be considered to be a form of looting? As a variant of the same phenomenon internationally.
In this case one may suspect that in Naarden they would be glad to have their panels back. (But possibly they are more at ease this way).

At the hands of Jan van Scorel you’re sure to look fine. Even though no one knows anymore who you were.

The Good Samaritan could just as well have been entitled ‘The Really Highly Improbably Posing Victim’. Or, only looking closer: ‘Not Everyone Is Good’. 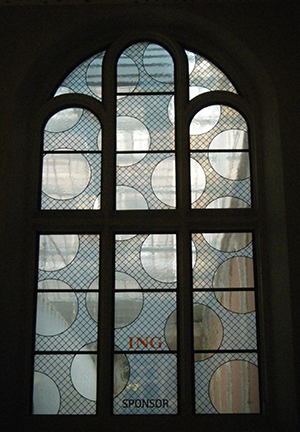 And (as a keter) stay out of the way of this man.

Very good: the Six Wardens, including the edifying text on its frame:

One lives rightly who does not judge out of Favor, Hatred or Selfishness.

Beautiful wine glasses aplenty. But why did they keep the wrong shape for that long, widening at the top? Whereas, to taste wine well, the chalice should narrow at the top. But, possibly, probably, the wine in those days made it preferable to taste not that well…

If I hadn’t known by chance that the composer Giacomo Puccini delighted in bereaving many ducks of their flying mode with a single shot of a colossal gun, I wouldn’t have believed that this fowling piece could be a serious weapon. Length: nearly 3 meters!

That mega two-handed sword is also an object to gape at. My goodness, what a whopper! Nearly two meters
of sword. Weight? And what kind of hands were clasping that hilt? By the time I would have managed to heave such a thing, I would surely have been gored ten times over with something more subtle. Like that rapier over there. Former owner: Michiel de Ruyter, Holland’s most famous admiral (1607-1676).
The hilt of that sword has quite a high gawk factor by itself, with a royal size bloodcoral showing a horse man (Dutch: ruiter).

It remains puzzling that deadly things, as weapons are, were often so beautifully decorated. Take these ivory flintlock pistols and those wheellock rifles of Cornelis Tromp, another famous admiral.
Curious detail of the last one: a hunter standing on the tail of his dog.

Less surprising, and ever deadlier: the ever continuing development of weaponry. Like the ‘bullet grape’, a bunch of bullets destined for moving targets. A heavy kind of shot: if one bullet misses you, probably another one won’t… 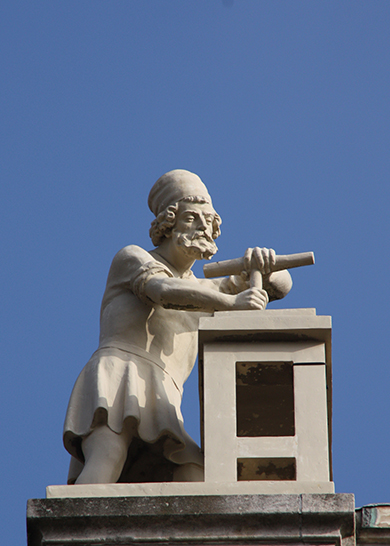 The New Rijksmuseum
The Rijks’ tortuous, ten year long restoration process was carefully registered on camera by director Oeke Hoogendijk. It resulted in both a single documentary and a version in four episodes. The latter especially is a gripping masterpiece, the opening sequence (for a start) rivaling that of Once Upon A Time In The West.

(The single film as well as the series, with English subtitles, can be purchased online).