At times, one can wish something even while knowing that such a wish will probably never be granted. Possibly just because of that improbability.
One such wish I have for Italy. Every New Year I wish that country, where I have spent a lot of time, will do away with the phenomenon that goes under the name of ‘doppiaggio‘.
In its recent Christmas edition, the renowned periodical The Economist ran an article on it. On ‘dubbing’ as it is called in English. I began reading it with high expectations, but the one thing that I wanted to read about was missing. So…

Once upon a time we had ‘The Iron Curtain’, between the communist East and the capitalist West. Then came ‘The Glass Ceiling’, that women hit their head against in a world dominated by men.
And now, now we have ‘The Plastic Walls’. Transparent and high tech, they belong to the modern age. In theory, we can take note of more opinions than ever before, but we don’t. In appearance we are swarming about as a society, but in practice we increasingly barricade ourselves against the ideas of others. As if, headsetted, earplugged, we are smartphoning along in trenches.
Research in test settings reveals that we are even willing to forgo money if that prevents us from being exposed to opinions other than our own. In the real world we are helped with that by algorithms that ensure we remain in the tracks we already were in. 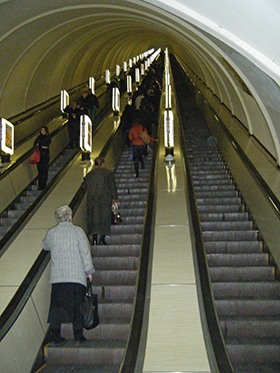 Dubbing, too, prevents one coming in contact with what we are unfamiliar with. While listening to other languages, even if you can’t understand them, broadens one’s horizon. Simply listening to, hearing sounds that are strange to you, enriches. In fact, ‘dubbing’ would be better called ‘dumbing’. It makes, or keeps you narrow-minded. Even though it is much more expensive than subtitling, it is a form of poverty.
Italians, Germans, the greatest part of the world population watches images with amputated sound. The Japanese in ‘The Seven Samurai’ speak Italian in Italy and German in Germany. As if you are looking at the top part of a horse on the undercarriage of a zebra. 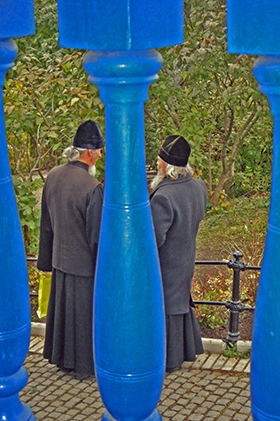 If one separates image and original sound, one robs the whole of its soul and the viewer of the chance to sense that soul. Maybe that is what many viewers prefer. Looking at strange animals from behind the zoo’s fence. From closer by, rather not.
But in a multicultural society, living together is eased when at times you hear the other also in

BESIDES
Doing away with dubbing would also mean learning English, today’s lingua franca, for free.
Something desperately needed in countries like Italy.

Subtitling is helpful too, where needed, to assist in learning to read.

Overdoing it?
In my local cinema, in Amsterdam, films in English nowadays are shown without any form of translation and films in other languages with subtitles in English.

Please allow me to share the following thoughts on the subject of subtitling vs. dubbing.

I agree with you regarding the artistic poverty of dubbing, even dubbing directed and acted by top professionals, and my friends, my colleagues and I consistently avoid dubbed films whenever we can. You and I are lucky, we grew up in a country with a tradition of subtitled films and TV shows and we learned at an early age to appreciate the actors’ authentic voices.

However, your article, short as it was, didn’t consider the following: some people can’t read subtitles.

A few years ago I spoke about the subject of dubbing with the international distribution department of Studio Ghibli in Tokyo – you know, the studio behind many extraordinary animated features, such as My Neighbour Totoro and Spirited Away. I asked them why they chose to dub their features for the English speaking countries and also for a selection of other countries. I explained that when I hear a Japanese character speak with a non-Japanese voice, I find it harder to identify with the character and I know that I’m not at all unique. That’s when Ghibli reminded me that a considerable percentage of their films’ audiences is too young to read subtitles at a comfortable speed.

They also mentioned another reason: spectators spend less time appreciating the images when they have to concentrate on texts. I can identify with that concern, since, as a film lover and a filmmaker, I care greatly about the visual seduction of a film.

Obviously your article is aimed at readers, but not everybody on our planet has learned to read and why shouldn’t they appreciate a film with a good dialogue?
I happen to be in Mumbai for a few days, for a film festival actually, and about a quarter of the total population in India is illiterate.

As I said, when watching foreign-language films, I’ll always prefer the subtitled versions to the dubbed ones. But there is an art to subtitling, and some of those films have been mistreated. For instance, when we watch a film with exquisite, sensitive visuals, a feast for the eye, and if those images happen to play with dark colours and subtle light effects, it can be such a pity to see bright, white subtitle texts interfere with the image. Besides, some subtitles are far too large or they have a pixel-ish crudeness.

Why not real subtitles, projected under the images?
Like surtitles/supertitles that you see, sometimes, in the theatre above the action.

Dudok de Wit’s own animated films normally do not need any kind of translation, because of their universal visual language.

Earlier on this site: a review on his film