A simple idea may avoid a lot of scratching (and worse)

– Background
This idea came to me as I live both in Italy and in Holland, but it goes without saying that its usefulness extends well beyond these countries.
For a few years now, people in Italy have been talking about the arrival of the Asian tiger mosquito. This variety has been imported into Europe in various ways and is adapting very well to its new environment, helped by climate change. Recently, the tiger mosquito and other potentially dangerous, originally tropical varieties have even been sighted in Holland as well. 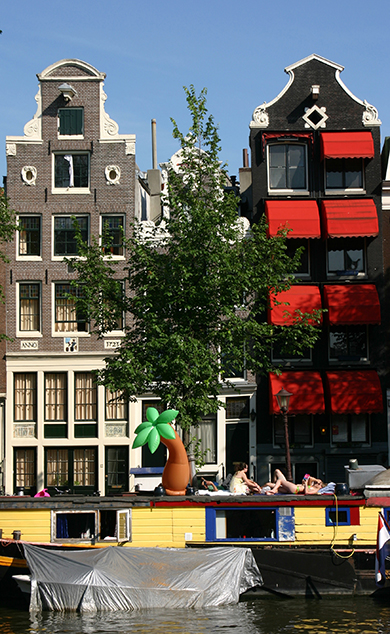 My own debut with the ’tigers’ came during a cycling trip along the river Po, when I was stung by them repeatedly. 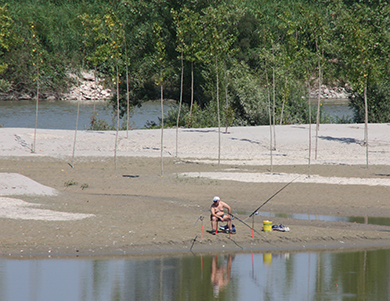 Along the river Po: awaiting them to bite…

Speaking with the locals, it appeared to have developed into a big problem, not least because tiger mosquitoes are active during day time, in a highly agressive way. So, apart from posing a health hazard, they are spoiling normal life as well. Therefore, the local newspaper ran a big advertisement by the authorities asking people to cooperate in the fight against this mosquito. Surprisingly, attention is focused not on large, but on small quantities of stagnant water. Tiger mosquitoes have a very restricted action radius and seem to prefer small quantities of water to breed in. Attention therefore concentrates on places where these conditions exist, right in the midst of where people live. Way on top of that list is the flower (plant) pot, and more precisely the saucer on which they are placed. Especially during periods with little or no precipitation, they are often even the only places where mosquitoes can find the minimum of water they require. So, by watering their beloved plants the human hosts of mosquitoes ironically provide those hated creatures with the breeding conditions they need.

– The Idea
In Italy, the authorities urge the public either to empty so-called pot saucers any time they contain water (in some areas even threatening people who do not comply with a fine), or to add poison. But in reality emptying them all the time is virtually impossible and adding insecticides is not only time & money consuming, but also bad for the environment.

A circular insect stopper made of mosquito netting.

The outer border of it fits tightly around the saucer, the inner one around the flower pot. 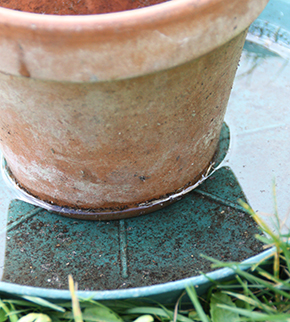 Such a product can be made in a variety of ways. For instance, a One-Size-Fits-All model can be made, using either an elastic, a velcro, or other tight fitting band on the outer and inner borders of the product. On the high end of such a product range, luxury models can be envisaged in which the saucer and the insect stopper are neatly integrated, coming in a range of different sizes to fit different pot sizes. In that case, the insect stopping part of the product can also be made of stiff(er), high quality material, allowing the pot to be inserted without any additional operation.

– Derivative Products
Other products that fit specific objects can be envisaged as well. For instance, perfect breeding conditions for mosquitoes exist in stocked car tyres that have been exposed to humidity. 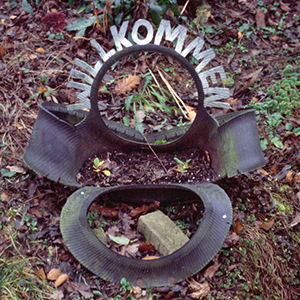 Welcome! (in the Black Forest)

Actually, exotic species are often imported together with those tyres. So, a robust product could be developed that strongly fits into the opening of a tyre. Any orderly stack of stocked tyres would require one such an insect stopper on the top tyre. Unorderly piles would need two stoppers per tyre.
In Holland, several dangerous exotic species were discovered in such a pile. The authorities had to go through a lot of trouble to exterminate them. At great cost. So, apart from voluntary use of ’tyre insect stoppers’, it would be wise for authorities to demand the use of such devices if they are available.

Of course, these big and small stoppers won’t stop the ’tigers’ and other mosquitoes completely. But low-tech can sometimes prove to be a great help.