We nearly forgot about it.
Let’s hope for the best, but the coming Brexit reminds us that the conflict in Northern Ireland has a long braking distance. No one knows that better than Gerry.

About a footballer, a super talent, and what happened to him.

It’s 2011. We had something to celebrate and I told someone of our plan.
‘Oh, Ireland!’, she exclaimed. ‘Do you know In The Name Of The Father‘?
A silence followed.
‘That film!’

Two days before our departure we find an envelope in our letter box. In it: a dvd.
One day before departure. I want to check something on the hotel website and google its fascinating name: ‘Aghadoe Heights’. But in doing so I end up on a site that is concerned with beings that don’t need a bed: ghosts and spirits. (Spot the difference). Are they on active duty in Ireland?
‘You bet!’, claims a couple that has been visiting the island for thirty years. And where, in their experience, are those creatures the most active? At Aghadoe Heights, the place and the name of our hotel. That spot is ‘haunted’ the couple proclaims on the internet.
Hm, are we going to experience the same thing?
On the day of our departure my eye catches our new dvd at the last instance. I grab it just in time and take it along.

Killarney, County Kerry, Ireland.
There it comes, the shuttle bus of the hotel. Its chauffeur greets us. It’s Gerry, his badge gives him away. A real Irishman, so we think. Spot on? Well, not quite. Time for small talk, on the way to the hotel. We have taken a film along, In The Name Of The Father. Has Gerry, by any chance, seen that one?
The answer arrived an instant later than could have been expected for a simple ‘Yes’ or ‘No’. After all, though, it came rather swiftly, now that we know that our question landed behind the steering wheel as a bomb shell. And that on a day that had begun so routinely, even though, already for ages, in Gerry’s life ‘Have a nice day’ had been something strictly reserved for the guests.
So stupefied had the driver been as a result of our question from the back seat, he told us later, that the same afternoon he couldn’t withhold himself in front of his manager.
‘I brought people in who asked me about In The Name Of The Father!’
‘No!’, his boss had cried out, in disbelief. What a coincidence!

The answer to our question was ‘Yes’. Gerry had that film keenly in mind.
‘Of course!’, any Irish person would say, as we now suspect. Irish people who haven’t seen In The Name Of… are probably quite rare. And still, it was remarkable that Gerry saw it too. That he somehow managed to do that.

We move into the hotel. Our room is splendid, but the view zero. Well, nearly. Rain and mist reduce the panorama to an absolute minimum. Only the graveyard is barely visible. Celtic crosses, weathering the bleak conditions. The crosses are probably used to it, while we are not. Seeing them, that is.
How many five star hotels would there be in the world with a Graveyard View? Some of the crosses are tilting a bit, as if the wind always wins in the end.
We install the dvd-player Gerry has given us. And Gerry adds a pledge to it: ‘After you have seen the film, I will tell you something about it’.
First, though, time to sleep. During the night the weather gets rough. Seriously. The wind yanks at the roof and the rain lashes the grave stones on the cemetery. But inside, not a ghost to be seen. 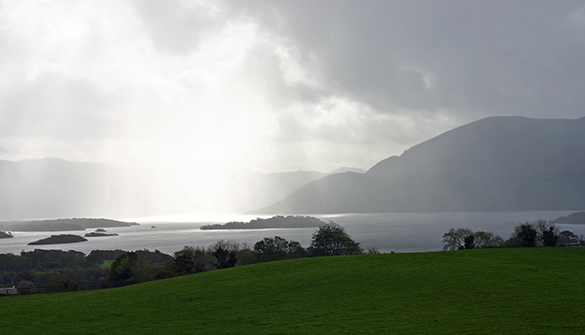 The next morning Ireland shows itself from a different side. The cemetery is now merely the overture of a Lake Side View, encompassing the lakes of Killarney and the surrounding hills. Admittedly, the sky isn’t a ‘radiant blue’, but that is not what you come to Ireland for. Clouds, mist and filtered sun are the perfect ingredients to accompany a visit to the graveyard, laying there now irresistibly.
More Irish it cannot be. Murphy, O’Sullivan. O’This, O’That. Strangers seem totally absent here, although losing a son feels the same everywhere. Only the last line may differ here and there:

A bit further on, a family is praying at a freshly dug grave. A minute later the children run by, noisily. Life goes on. Hide and seek.

Gerry passes by, to see if the dvd-player works. In the process he sees the dvd we brought with us. Only that sight proves to be too much. He can no longer contain what’s inside.
‘That film is about me’, he says. It is about him, in a way. Gerry’s brakes let go. It comes out in flashes. He quivers. Or is it the air around him? Because of high tension. He looks at us as if our eyes are mirrors.
‘You are seeing it’, Gerry says.
I try to calm him down. Sweat glistens on his upper lip. But he wants to tell it, he has to tell it.
All right then, we agree to begin at the beginning, but only at the end of his shift. First the story of the film, then his.
Gerry leaves the room while we go for a walk. But not for long. Our festive ‘dolce far niente’ is over. Our day of celebrations now comprises Gerry and the film. A tight schedule. We hastily return, order high tea, start the film.
It becomes Tea & Terror. A thundering explosion bursts from the screen. In The Name Of The Father is about the ‘Guildford Four’, four young people who end up behind bars during the Northern Irish civil war. Wrongly.
The leading character in this true story is… Gerry. Another one. ‘Ours’ drops in, ten minutes before the end of the film. He sits down on the edge of the bed, his eyes fixed at the images he already knows so well. Once, twice, three times he gets up, walks away and comes back. He wants to watch, he has to watch, but he can’t.
On the flat-screen acquittal is in the air. Our Gerry looks at the judge on the screen and shouts: ‘Say it, say it!’ He can’t wait for it.
The accused are discharged, the film ends. A deep sigh. What emotion!
A deep breath before we go up. We enter the penthouse of the hotel. Sheer luxury, now vacated by the guests. A cleaning lady hastily completes the last touches of her work and then leaves us alone, on the couch.
We begin, at the beginning.

Gerry comes from Derry. Is that the same place that is also called Londonderry? It is, Gerry affirms, but Catholics from that place don’t manage to get the London-part out of their mouths.
Gerry McGowan is born in 1961, just in time to grow up during ‘The Troubles’. It is a rather euphemistic denomination for a conflict that has torn Northern Ireland apart for tens of years.

‘The Troubles’ in Northern Ireland began at the end of the sixties. They were rooted in tensions between the Catholic minority and a Protestant majority. The conflict centered around the ‘nationalists’ – mainly Catholics who wanted secession from the United Kingdom – and the predominantly Protestant ‘unionists’ who resisted that. The militants on the Catholic side were called ‘republicans’, the Protestant ones went by the term ‘loyalists’. A prominent role was played by the (Provisional) IRA, the Irish Republican Army.
The question is, though, whether this simple representation of things was accurate, or remained so. Long after the drama had started, I met two Northern Irish men who explained the fact that ’their’ conflict continued to drag on with one word: mafia. According to them, over time religion and actual social contrasts no longer played a (decisive) role. In their view the hostilities and terror were mainly kept alive by criminal interests, whereby the ‘freedom fighters’ could be better described as ‘gang members’.
It brings to the fore the question to what extent conflicts in general go on for longer than is actually ‘necessary’. Probably other, improper factors are in play, like an addiction to power that is derived from the existence of an enemy. That enemy falling away may be even more frightening than the enemy itself. Suddenly reduced again to a normal citizen, the terrorist is left with the terrifying question ‘Who am I, now? Possibly, this also influences the occasional flaring up of Northern Irish violence.
As violence is concerned, ‘Bloody Sunday’ was maybe an all time low. It was the Derry-incident in 1972 during which many protesters were shot by the British army. Fourteen protesters died.
In all, during the Troubles more than three and a half thousand people were killed. The Troubles ended, in principle, with the signing of the so-called ‘Good Friday Agreement’ of 1998.