A MESSAGE from… A CAT

Okay, this story isn’t exactly ‘News’. It didn’t happen today. But still, as the Italian shores are approached every day by rickety boats, overloaded with would be immigrants, it hasn’t lost anything of its universal appeal. As if it has something to tell us.

In the middle of a gorgeous landscape stands a house. A swimming pool glistens, among hills, woods and an ancient castle in the distance. Fairy-tale scenery. Reality, though, is even better.
On the wood pile next to the house, a cat gives birth to three kittens, little balls of wool. Where that cat came from? No one has a clue. To Antonella, the cook who lives in the house, it doesn’t matter. Her heart melts, arranging the litter, wanting to do good.
The brand-new mother cat begs to differ. Not wanting any human interference, she relocates. One by one she takes up her young and goes for a stroll.
Not far from the house lies a large concrete slab. At one edge the earth below it is cavernous, hidden from view by some bushes, an ideal new dwelling for the new single-parent family.
Surprise! They have neighbours. Another one-parent household has chosen this adress too, a mother hedgehog with four tiny, tiny ones. Concrete Slab Street No. 1 & 3. Enter without knocking. Mr and Mrs Fox: no admittance.
Then, one dark night, fate strikes. Mother hedgehog falls into the swimming pool. Surely, her babies now await starvation. Or do they? They don’t. They are saved – by the cat. Where there is room for three, why not make room for seven? Although, not all at a time please!
It is Antonella’s husband who sees it first. Roberto’s eyes nearly pop out of his head. From a distance it seems to him as if a cat is breast-feeding baby-mice. As he edges closer, his surprise isn’t the lesser for it.

We only hear about it ourselves more than a week later and hasten towards ‘The Tuscan Miracle’. We know the stories of pets feeding animals of another species, but invariably arranged by man: the bitch with the lion cubs. We are familiar too with the cuckoo, but this, a life-saving angelcat? Never.
The nursery, it appears, has been phased out by now, as growing proceeds at an impressive pace. The little hedgehogs are already about twice their birth size and are scratching around. Just for a moment, one quick drink at La Mamma’s and then off again on the search for beetles and bugs.
Mamma is very watchful of her spiky ones. They are hard to make out with their perfect camouflage.

But you can hear them, scraping, especially under the bushes. One of them is sound asleep, right in the open, not as well curled up as he should be. Oh dear. Can their new mother teach them how to do it properly? Of course she can’t. Don’t they imitate their stepbrothers too much? Afraid so. But then, nibbling on that ant surely wasn’t taught them by a cat either.
Roberto’s German shepherd ventures to come close. A mistake. In a flash the cat charges, like a fury. The dog clears off, quite relieved it seems to have escaped unhurt.
The cat returns among her seven mobile babies. Rather a lot to keep track of. The kittens want to play with their spiny brothers – or are they sisters? –, trying to put their paws on them. Hmm, still startles. 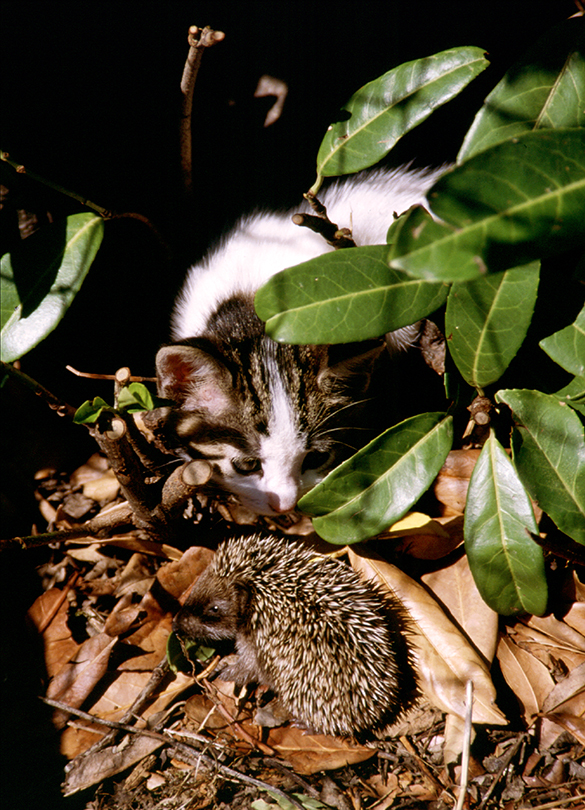 For the heroine of all this we have brought some cat food. The hedgehoggies want to try it too. We do another count: four, plus three, plus one. And what a one!
Thanks for the message.

Other texts in English