Skip to content
India outlaws gay sex (again). Right there, where the Wheel of Life is thought to turn round and round, they are trying to turn back the clock.

This week I received an e-mail, through someone I don’t know, containing an open letter by Ms.Leila Seth. I do know her however. She is the mother of the highly acclaimed writer Vikram Seth.
The letter arrived while the cycle of my own mother’s life is slowly closing. It is a process that comes with its side effects, like going through old papers. So, last week, I came upon an article I wrote about Vikram. Thirty years ago. 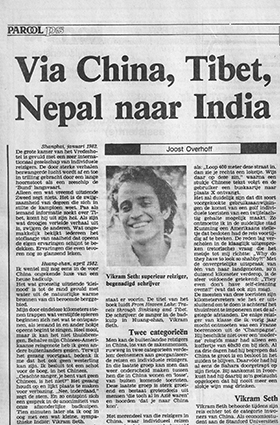 Let me translate the part of the article describing how I met The Honourable Mr.Seth. In China.
(After last weeks ‘Airport Concert’ one might get the impression I specialize in unusual encounters).

Huangshan, April 1982.
I whirl once more in the incredible luxury of a real bathtub.This rather grubby looking thing is filled to the edge with thermal hot water, that springs from this famous mountain area.
My muscles, tightened by miles of stony stairs, are just beginning to relax when someone in the booth next to mine starts singing, beautifully, but puzzling. Apart from my Chinese-American fellow traveller I haven’t noticed any other foreigners around. While the singing continues, I conclude it cannot be a westerner either. I decide to take a shot at it, in Chinese.
‘Dear Singer, I bet you’re not Chinese, are you?’, I say out loud.
The singing stops, leaving the air filled with a mix of silence and surprise.
‘No, I am not’, it comes back.
And, so, a conversation starts from the anonymity of our individual bathtubs.
Ten minutes later I stand eye to eye with a small, sympathetic Indian: Vikram Seth.

We became friends, and some time later he came to visit me in Beijing, together with his mother and his brother.
Only someone who could mistake a diamond for a pebble could fail to notice that Vikram was brilliant, but I had no idea that Vikram was gay. Not being gay myself, I lacked the right sensor. (Now, after having lived for many years in Amsterdam, my eye is fully trained).
In failing to spot homosexuals then I wasn’t alone. It came up as a topic of conversation among foreign students: ‘The Chinese gays, where are they?!’ Quite a few Chinese were convinced that homosexuals in their country didn’t exist. That was hard, if not impossible to believe. Moreover, gay sex was a criminal offence, pretty meaningless if gays didn’t exist. But it was certainly good enough for them to keep a low profile, to the point of trying ‘not to be’.
Since ‘97 gay sex is allowed in China. More recently it was declared legal in India as well. Not anymore. That is what drove Ms.Seth, as a judge and as a mother, to write her letter.
Forbidding gay sex is like, say, forbidding the wind to blow from the east. It is, in one word, ridiculous. Gays have always existed, everywhere, and will not go away whatever law you may throw at them. (As a matter of fact, I would be interested to know whether there exist any statistics about a ‘Brilliance to Gay Ratio’). In any case, gays can’t be expected just to wave at each other until The End.
When I first arrived in China, news broke about a new phenomenon: AIDS. Back then, it was rather often seen as a just punishment for lewd, ‘unnatural’ behaviour. At most, that line of thought could be excused as far as certain excesses in the gay community were concerned. But to forbid people who love each other to express their love physically is not only ridiculous, it is inhumane.
India, you are too great to be either.

The letter by Ms.Leila Seth

A mother and a judge speaks out on section 377

My name is Leila Seth. I am 83 years old. I have been in a long and happy marriage of more than sixty years with my husband Premo, and am the mother of three children. The eldest, Vikram, is a writer. The second, Shantum, is a Buddhist teacher. The third, Aradhana, is an artist and film-maker. I love them all. My husband and I have brought them up with the values we were brought up with – honesty, courage and sympathy for others. We know that they are hardworking and affectionate people, who are trying to do some good in the world.

But our eldest, Vikram, is now a criminal, an unapprehended felon. This is because, like many millions of other Indians, he is gay; and last month, two judges of the Supreme Court overturned the judgment of two judges of the Delhi High Court that, four years ago, decriminalized homosexuality. Now, once again, if Vikram falls in love with another man, he will be committing a crime punishable by imprisonment for life if he expresses his love physically. The Supreme Court judgment means that he would have to be celibate for the rest of his life – or else leave the country where he was born, to which he belongs, and which he loves more than any other.

I myself have been a judge for more than fourteen years – first, as a judge of the Delhi High Court, then as Chief Justice of the Himachal Pradesh High Court. Later, I served as a member of the Law Commission, as well as the Justice J.S. Verma Committee, which resulted in the Criminal Law Amendment Act 2013 being passed. I have great respect for legal proprieties in general, and would not normally comment on a judgment, but I am making an exception in this case.
I read the judgment of the Delhi High Court when it came out four years ago. It was a model of learning, humanity and application of Indian Constitutional principles. It was well crafted, and its reasoning clearly set out. It decided that Section 377 of the Indian Penal Code infringed Article 14 of the Constitution, which deals with the fundamental right to equality. It infringed Article 15, which deals with the fundamental right to non-discrimination . And it infringed Article 21, which covers the fundamental right to life and liberty, including privacy and dignity. The judgment of the High Court ‘read down’ Section 377 in order to decriminalize private, adult, consensual sexual acts.
The government found no fault with the judgment and did not appeal. However, a number of people who had no real standing in the matter did challenge it. Two judges of the Supreme Court heard the appeal in early 2012. Then, 21 months later, and on the very morning of the retirement of one of them, the judgment was finally pronounced. The Delhi High Court judgment was set aside, Section 377 was reinstated in full, and even private, adult, consensual sexual acts other than the one considered ‘natural’ were criminalized again.
As the mother of my elder son, I was extremely upset. But as a lawyer and a former judge, I decided to reserve my views till I had read the judgment. When I read it, it would be true to say that I found it difficult to follow its logic.
A host of academics and lawyers have critiqued the judgment in great detail, including the non-addressal of the Article 15 argument, and have found it wanting in many respects. I do not intend to repeat those criticisms. However, I should point out that both learning and science get rather short shrift. Instead of welcoming cogent arguments from jurisprudence outside India, which is accepted practice in cases of fundamental rights, the judgment specifically dismisses them as being irrelevant. Further, rather than following medical, biological and psychological evidence , which show that homosexuality is a completely natural condition, part of a range not only of human sexuality but of the sexuality of almost every animal species we know, the judgment continues to talk in terms of ‘unnatural’ acts, even as it says that it would be difficult to list them.
But what has pained me and is more harmful is the spirit of the judgment. The interpretation of law is untempered by any sympathy for the suffering of others.
The voluminous accounts of rape, torture, extortion and harassment suffered by gay and transgender people as a result of this law do not appear to have moved the court. Nor does the court appear concerned about the parents of such people, who stated before the court that the law induced in their children deep fear, profound self-doubt and the inability to peacefully enjoy family life. I know this to be true from personal experience. The judgment fails to appreciate the stigma that is attached to persons and families because of this criminalization.

Through love’s great power to be made whole
In mind and body, heart and soul –
Through freedom to find joy, or be
By dint of joy itself set free
In love and in companionhood:
This is the true and natural good.
To undo justice, and to seek
To quash the rights that guard the weak –
To sneer at love, and wrench apart
The bonds of body, mind and heart
With specious reason and no rhyme:
This is the true unnatural crime.