Time to fly. Or, so we wanted. ‘We’, that is Alessandro and myself. We didn’t know each other, but what Italians call ‘il destino‘ had decided that was about to change.
Destiny, it has to be said, was forced upon us by human beings. By the French, to be exact. French air traffic controllers had decided to cause chaos by going on strike. By closing French air space they even managed to disrupt flights from Holland to Italy.
So, there I sat, at Eindhoven Airport. Waiting. And waiting. Until destiny showed up, carrying a guitar case. It was Alessandro, who asked if he could sit next to me.
‘You’re welcome’, I said.
As all people know who carry musical instruments in more or less mysteriously shaped cases, for making contact it’s the next best thing to a baby. (If you have trouble striking up conversations, just carrying an empty case will work wonders).
In our case, conversation quickly revealed Alessandro and I had something in common. Alessandro is from Livorno, a Tuscan town that is famous for a copious dish: Cacciucco. Precisely the title of a book I have written on Italy as a whole, besides being the name of my website. Destiny met coincidence.
Alessandro, though, had other things on his mind than cacciucco. He was on his way to Rome, to take part in a guitar competition the next day. Problem: he had counted on having enough time to rehearse the pieces he had to play. But due to the strike he was stuck in the departure hall of an airport.
‘No problem’, I said. ‘Just practice right here. Audience guaranteed’.
Alessandro hesitated, but then opened his guitar case after all. And so it happened, Alessandro’s ‘Airport Concert’.
From the first notes he struck it was obvious he was a candidate for the first prize, even without having heard the others. His play was confident and mature, even though he still had to graduate from the conservatory.
Besides, he already had the perfect name for fame: Alessandro Paganelli. Sounds like music. 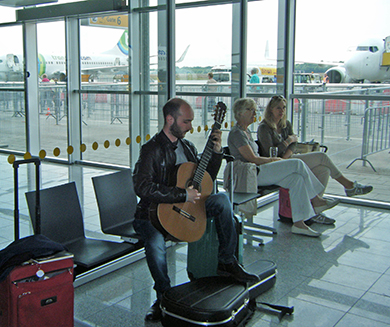 There exists a nice story about the physician and organist Albert Schweitzer. As a child, he was sitting on a meadow in the Alps. Not far away stood a pram. In it lay an even smaller child by the name of Jean-Paul Sartre. The pram started riding by itself, down the slope. Little Albert ran after it and managed to grab the handle. Later in life he stated: ‘And that was my contribution to existentialism’.
So now, later in my own life, when Alessandro will be famous, I’ll be able to say something similar. Thanks to his ‘Airport Concert’.